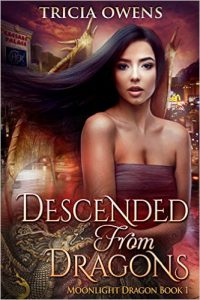 Descended from Dragons by Tricia Owens is an urban fantasy adventure set in the mystical underworld of Las Vegas. Anne Moody runs a pawn shop that deals with both the magical and the mundane, buying items from desperate tourists who’ve run up gambling debts, and from those of a more mysterious persuasion. When Anne buys a gargoyle from the flirtatious Christian, she doesn’t expect it to set her on an adventure that could cost her life, or potentially destroy all of Las Vegas. The gargoyle, it turns out, is another magical being but one infected with a demon. Anne must find a way to get rid of the demon, and she must do it without losing control of her dragon heritage or bringing down the wrath of the mysterious Oddsmakers who rule the city.

I wasn’t sure about this book on the first few pages but it quickly won me over. It’s a light-hearted story, despite the sometimes dark subject matter, that’s told in a humorous style that should appeal to fans of The Dresden Files or Rivers of London.

Owens creates a world where the magic exists alongside normal life, with incubuses working in strip clubs and shape-shifters selling wares from food vans. I was left with a lot of questions about this magical world, particularly about the Oddsmakers who are mentioned several times as a vaguely threatening power who rule over Las Vegas. I was also left with questions about Anne’s heritage, her family, and her magic. I’m hoping, since Descended from Dragons in the first in a series, that Owens will return to these questions in later books.

The characters are interesting and fun, though I did feel the romance bloomed a little too quickly and on nothing more than physical appearance, but that’s hardly and uncommon occurrence in fantasy novels.

On the whole, Descended from Dragons is an entertaining read if you want something fun and easy, and enjoy slightly humorous fantasy adventures. Four stars.

I received a copy of Descended from Dragons by Tricia Owens in exchange for a review.