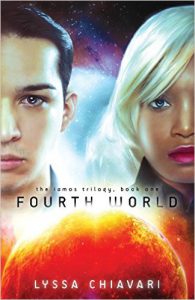 I’m continuing my series of giveaways on Tumblr with Fourth World by Lyssa Chiavari. I chose this book because as well as having a racially diverse mix of characters, it has a protagonist who is demi-sexual – and who actually uses this term to describe himself. This shouldn’t be a big deal, but it is. The other protagonist appears to be asexual but this isn’t explicitly stated in the text (mostly because she would have no context for the term).

If you want a chance to win this book, go over to Tumblr and reblog the giveaway post.