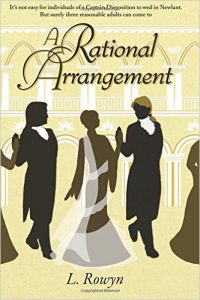 A Rational Arrangement by L Rowyn is a fantasy romance set in the land of Paradise, which has very rigid societal expectations. There are any number of unwritten rules about what is acceptable behaviour for men and women of different ranks. Unfortunately, Wisteria has never been good at unwritten rules. She needs things to be explicitly spelled out for her. So when a meeting is arranged between Wisteria and Lord Nikola on the understanding that they might get engaged, Wisteria turns up with a detailed document spelling out the expectations on both a business level and a personal level. That her document discusses details around procreation and the possibility of infidelity shocks both sets of parents, but Nik is intrigued and amused by her openness. He wants to know more about this woman who can be so forthright on forbidden subjects.

His growing fondness for Wisteria however does nothing to diminish his attraction to the handsome Lord Justin. Here the rules are more clear and a sexual relationship between men is considered abhorrent so the two must keep their love affair secret. Nik is not the only one drawn to Justin though – Wisteria finds herself equally attracted and wishes society would let her marry them both.

Much of this book is focused on the romance between the three characters, but there are some elements of action and suspense in the plot. It should be noted though that if you’re looking for adventure and battles in every other chapter, you might want to look elsewhere. If you like the idea of character-driven romance however, this is a great book.

I love the character of Wisteria. I found myself relating to her confusion and frustration at the illogic of many societal standards. She is an open and honest character who just wishes people would be more up front about things. Nik is also an easy character to like. He’s dedicated to trying to help people, and he just wants to do the right thing. It’s easy to understand why his people feel such loyalty to him.

The only character I didn’t particularly like was Justin, but he grew on me as the story progressed. My main problem with him was that he viewed certain groups/classes of people as inferior to him – he actually says, “I hate apologising to inferiors,” when he realises he mistreated an employee. This is probably excellent characterisation for a lord in a fantasy novel, but it made it hard for me to like him as a person. On the other hand, his loyalty towards Nik made him endearing and some of his actions towards the middle of the book won me over a little.

Some of the plot twists were so well sign-posted that I could see them coming a mile off, but they were unusual enough that I have no problem forgiving them for being obvious. With so many books full of love triangles, I was happy to read this different take on the trope.

From a representation standpoint, I thought this book did extremely well. The word “autism” is never used but Wisteria is clearly written as autistic. The way this is addressed in the book makes it clear that this isn’t an illness or a problem to be fixed, but simply a different way of being.

Nik has the ability to magically heal mental illness and this meant that issues of mental illness come up frequently in the background of the story – there is mention of a character who used to be suicidal, a character goes through trauma and suffers from what is clearly PSTD (again, the modern term is not used), while there are background characters suffering from everything from anxiety disorders to full-blown hallucinations. These are all treated in a highly respectful way.

All this is on top of Nik’s bisexuality and the issues of sexuality that are addressed.

While the book was a little predictable in places, it was highly enjoyable from start to finish. I will be on the look-out for other books by this author. Four and a half stars.

One thought on “Review: A Rational Arrangement”