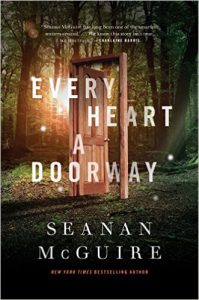 Every month in 2016 I’m giving away a different science fiction or fantasy book that highlights some form of diversity (preferably more than one). September’s book is the charming Every Heart a Doorway which I have reviewed in a previous blog post.

I chose this book for its LGBTQ representation. The protagonist is asexual, and actually uses this word to describe herself which is astonishingly rare. Another major character in the book is trans. There is an incident of transphobic language from one of the other characters but this is clearly addressed by the narrative and the other characters as being unacceptable behaviour.

If you want a chance to win this book, head over to Tumblr and reblog the giveaway post before the end of September.