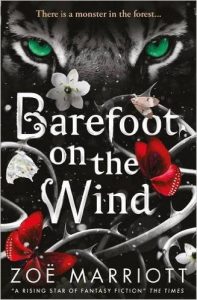 Barefoot on the Wind by Zoe Marriott is a book very loosely inspired by the fairytale of Beauty and the Beast. It is described as a companion book to her earlier book Shadows on the Moon and is set in the same Japan-inspired fantasy world, but it deals with completely different characters and situations so you don’t need to know anything about that first book to enjoy this one.

Hana’s village has been cursed for generations. Surrounded on all sides by dark woods that house a monster, the village is completely cut off from the outside world. Every month, on the dark of the moon, a villager will disappear into those dark woods never to be seen again. When Hana’s father vanishes, Hana follows him and finds him bleeding and unconscious in the woods. Even when she brings him home, he won’t wake from his enchanted sleep, so Hana goes back into the woods to fight the monster and try to break the curse in order to save her father’s life.

While there is some action and Hana is a hunter, much of the book focuses on the emotional journey rather than on adventure. It deals with grief and anger, particularly as Hana comes to learn of the nature of the curse. Despite being a book full of magic, the emotions behind it all feel very real, very human. The reactions of Hana’s neighbours, the way her father acted after Hana’s brother’s death, and even the acts that started it all, all feel genuine.

It’s also pretty clear that Hana suffers from periods of depression, but this doesn’t define her or her story. I think this is very important.

In places, the plot was a little predictable, largely because of the fairytale source, but Marriott approaches it in new and interesting ways. The explanation of the curse was something that made perfect sense when it was revealed, without being something I guessed ahead of times.

This isn’t my favourite of Marriott’s books by far (I much preferred Shadows on the Moon) but I did enjoy it and I would recommend it if you enjoy young adult fantasy. Four stars.