If you haven’t set New Year’s Resolutions yet, here’s a suggestion for one: write more Amazon reviews.

As an author, I can tell you that Amazon reviews are worth gold to authors. Literally, they make a huge difference to how a book sells.

It probably doesn’t matter if we’re talking about something like Game of Thrones, which currently has 3609 reviews on the UK Amazon. But the amazing On the Edge of Gone (probably the best book I read in 2016) only has 9.

7 of those 9 reviews are 5 stars, the other 2 are 4 stars, but here’s the thing: Amazon doesn’t start including books in their “recommended” lists until it has more than 10 positive reviews (positive meaning 4 or 5 stars). So this fantastic book isn’t being suggested to new readers because it doesn’t have enough reviews.

Another book with an autistic protagonist, Viral Nation, has 8 reviews on the UK Amazon.

One of my own books, Omega Rising, has 5 reviews. They’re all 5 stars, but that’s not enough to tip it over Amazon’s threshold.

Well-written reviews can help people decide whether or not to buy a book, but any review at all can count towards the total reviews and determine whether the book shows up in the “also purchased” lists and “recommended for you” sections. It’s also worth noting that reviews are counted separately on the different regional sites – so On the Edge of Gone mentioned above actually has 28 reviews on the US version of Amazon, but those don’t count towards its UK total.

So if you’ve enjoyed a book, especially a book by a new or independent author, leave a review. If you buy a book and notice that it has less than 10 reviews, make a note to come back when you’ve finished reading and give your opinion. You don’t have to write a lengthy essay. A detailed review is fantastic, but for some things, it’s quantity rather than quality that matters, so ticking 4 stars and writing “good book” is still going to be a massive help to an author. It will help get the book in front of new potential readers and mean that the authors can spend more time writing and less time wondering how they’re going to pay the rent next month.

In 2017, when you go to browse Amazon for new books, take a minute to go through your old purchases and leave a few, short reviews. Your favourite authors will love you for it.

If you follow me over on Tumblr, you may have noticed me getting quite excited recently about an anime show called Yuri!!! On Ice. I thought this show deserved a mention on this blog because it includes what is probably the best-executed plot twist I’ve seen on a TV show. I will explore this here while attempting not to give major spoilers (which is going to be tricky, since I am discussing a plot twist). 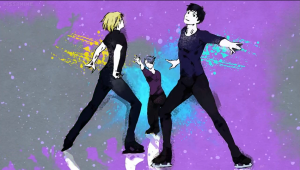 As a bit of background, Yuri!!! On Ice is a show about figure skaters and the main character is a Japanese skater called Yuri Katsuki. There are two other characters main enough to get featured on the show’s opening credits and one of those is a Russian skater called Victor Nikiforov. As the story opens, Yuri has just suffered a humiliating loss and is considering quitting the spots, while Victor is at his peak performance, setting world records, and winning gold medal after gold medal. In the first episode, Victor decides to quit skating, flies to Japan, and announces that he is now Yuri’s coach – much to everyone’s astonishment, especially Yuri. Yuri has idolised Victor for years, so their early interactions are filled with awkwardness, but gradually they open up to each other. 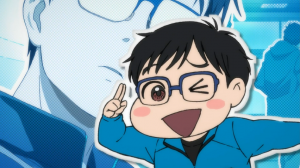 Given that the show has Yuri’s name on it, it’s unsurprising that as the audience, we see all this from Yuri’s perspective. We see him discussing the situation with friends, we hear his thoughts in inner monologues, and he acts as a narrator speaking directly to the audience at times. This means that a lot around Victor, specially his reasons for coming to Japan, are concealed from those watching the show. This led to some speculation among the fans about his motivations. 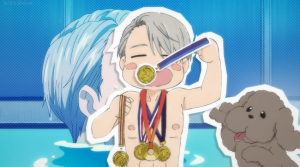 Then we reach episode 10 of this 12 episode show. After having seen 9 episodes narrated by Yuri, we get an episode with Victor as the narrator. During this episode, a key piece of information is revealed that changes the interpretation of everything that came before it. Not that I said “changes the interpretation”. This information doesn’t create plot holes or raise questions in the way plot twists sometimes do. The revelation instead answers questions – only some of which the audience knew to ask.

The key answer it provides is, of course, why Victor chose to become Yuri’s coach, but it allows their early interactions to be seen in a completely new light. On top of that, behaviour and dialogue from the minor characters, that had previously been dismissed as that character just being like that, now slotted into place. An insult from one character, an angry statement from another, an overly touchy-feeling greeting from a third, all make more sense in the wake of the revelation. It also allows the audience to go back and watch the early episodes again and see Victor’s side of the story. Nothing about the episodes had to change, but the intepretation of so many interactions is completely flipped.

As a writer, I think it’s worth highlighting what this show does well because these are lessons we can take to our own writing.

First, the plot twist doesn’t create any plot holes. I’ve read books and seen shows before where a plot twist leaves the audience wondering, “But if this is the case, then why did that thing happen?” You don’t want a plot twist to raise more questions than it answers.

Which brings me to point two, the plot twist should answer questions. A well-written plot twist will leave readers/viewers thinking, “Oh! So that’s why that thing happened. It all makes sense now.”

Finally, the plot twist should be surprising. I don’t think anyone saw this revelation coming. I watched the show with a friend who’d been seeing discussions on Tumblr about Yuri!!! On Ice and knew that there was a major plot twist coming in this episode, but she was still surprised by the nature of it. If a plot twist can surprise you even when you know it’s coming, the writers have definitely done something right.

So if you want a lesson in how to get a plot twist right, I recommend watching this show. Plus it’s fun, which is always a bonus. 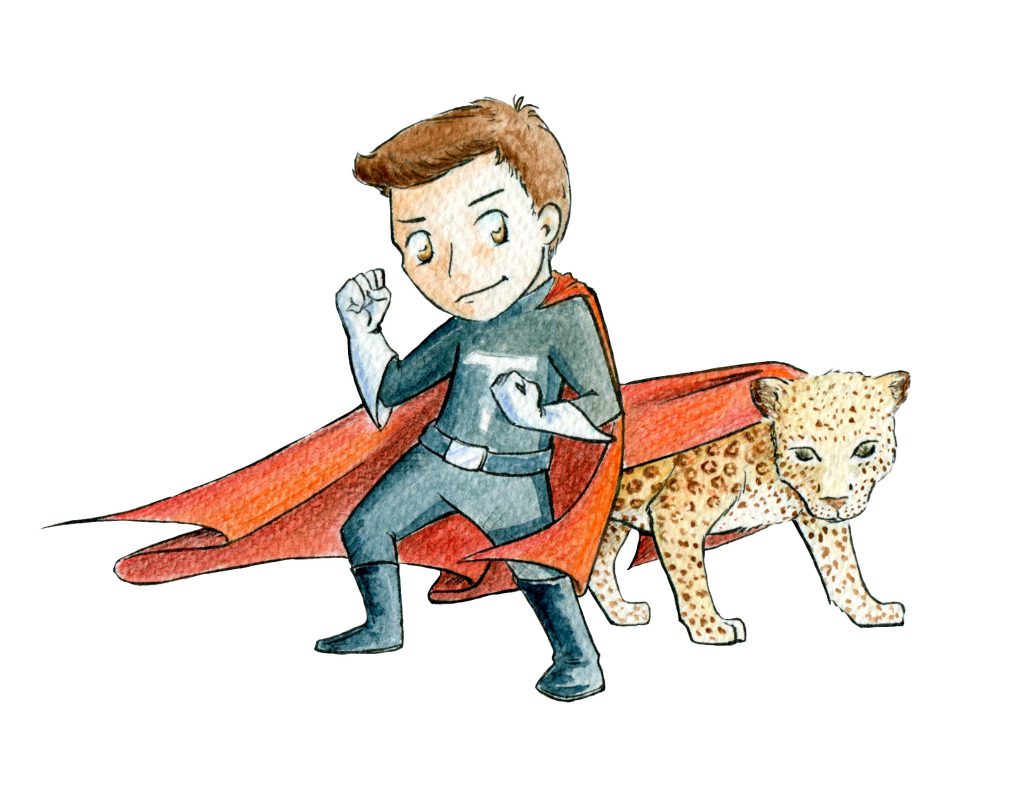 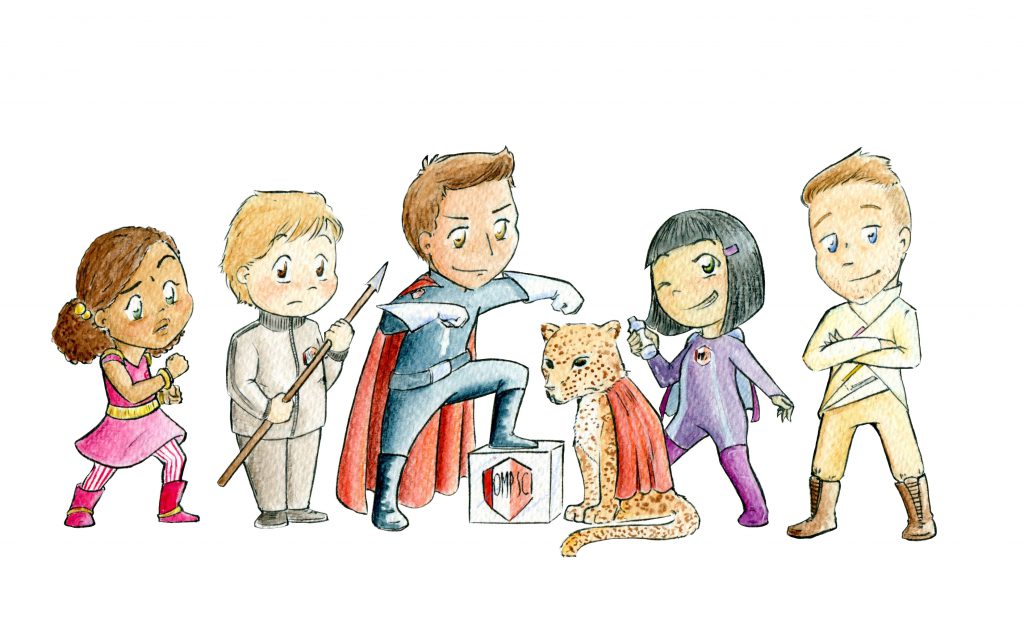 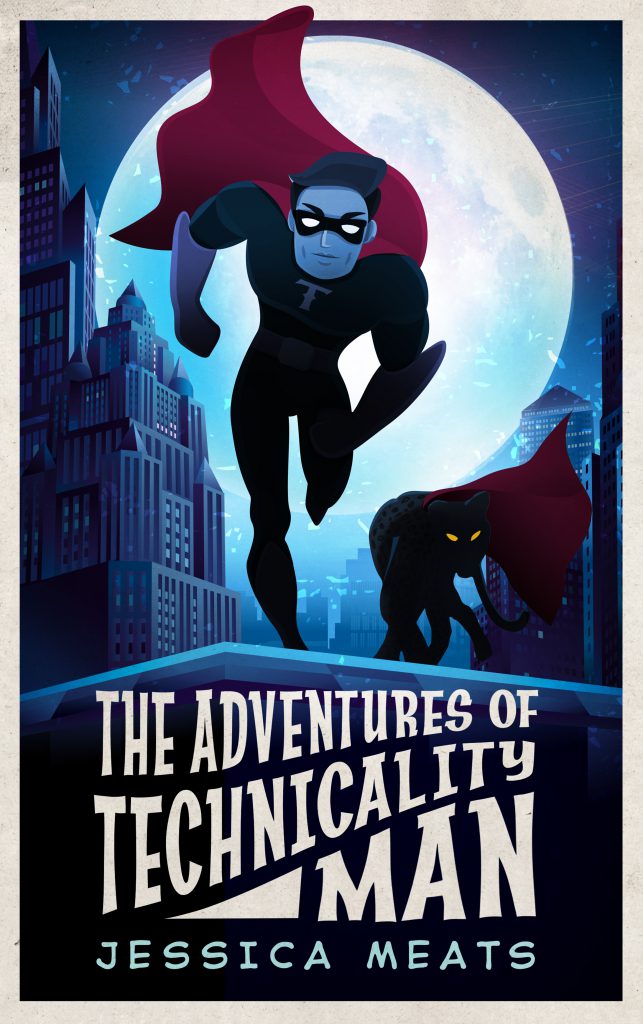 My new superhero parody, The Adventures of Technicality Man, is now available for pre-order from Amazon (UK link, US link). This is the story of a ragtag bunch of heroes and a lot of ridiculous puns.

So join Technicality Man, Continuity Leopard as they fight to make sure that the good guys will always win.

I’ve written a post in the past about editors and the work they do in turning a unpolished piece of writing into something ready for publication. I’ve worked with a number of different people over the years, some of whom were employed by a specific publishing companies and others who worked independently. If you’re getting published through a publishing company, that publishing company should handle the editing and get your manuscript in front of people with the right skills (not the word “should” – I once had an editor that kept getting past and passed the wrong way round and changing correct instances to the incorrect ones). However, if you’re embarking on self-publishing, you have to find the people with those skills yourself. An internet search will uncover a mountain of resources but it’s hard to know who can be trusted to do a good job.

Since I’ve been going through edits recently for the next Codename Omega book and the much sillier Technicality Man story, I thought I would mention a couple of people who have done some great editing work for me. Both of these are people I’m happy to recommend.

The first is Ro Smith, who I was once part of a creative writing group with. Since then, she has done work as a professional editor and proof-reader for both philosophy journals and publishing companies. She has been the main editor for two of the Codename Omega books now, including the one which should be coming out early in 2017. Her website is http://www.rhube.co.uk/ and you can find her contact details on that site if you want to work with her.

The second person is David Stewart. He was a former colleague who does work, amoung other things, as a librarian, researcher, and editor. He offers proofreading and copy-editing services, or a combination of the two. He is very flexible in offering what might be needed to check, tweak, edit, or reshape work. You can contact him at stewart_dk@hotmail.com if you want to hire him.

Both of these people do great work at very fair rates.