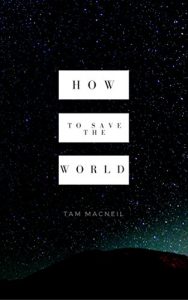 How to Save the World by Tam MacNeil (UK link, US link), not to be confused with one of the many other books with the same or similar name, is a book that walks the line between fantasy and science fiction. Monsters are rising from the sea and emerging from the forests, death gods who call to the people nearby. Anyone who hears their song is drawn to them and filled with the urge to commit suicide. A man named Cameron runs the company who produces mech – huge metal machines that can fight against these monsters. The mechs are designed to be driven by a human being, but the experience is horrifying. In this world, Alex and Sean are assassins working for Cameron, killing anyone he sends them after. They decide to escape their life by killing Cameron but when the attempt fails, Sean manages to get out and start a new life but Alex is caught and forced inside one of the mechs.

When I first started this book I had my doubts about it. For the first couple of chapters, I wasn’t sure I’d be able to connect with Alex or Sean, who we see committing murders without seeming to care about it. How wrong I was. It didn’t take long for the book to start exploring their history, the way they protect each other, and their desire to have a better life than the one they’re forced to endure. Once the book got going it was very easy to have sympathy for both of them and some parts of the book were absolutely heart-wrenching. I was in tears in places.

The story deals with some very dark themes and difficult issues. There are explorations of rape, child abuse, grooming, suicide, grief, and some scenes that can only be described as torture. These issues are dealt with in a very respectful way and it really tugs on the heart-strings, but it could be a very difficult read for some people because of how real the emotion feels.

The book is definitely driven by the emotion. There is some mystery and a fair amount of action, with the characters working to, as the title says, save the world from the monsters, but really the core of the book is the emotional journey between Sean and Alex.

The relationship between the two main characters is beautifully written. We get to see their history and the background behind their interactions as well as the moments on the page. It works in a very layered way. You can genuinely feel how much they love each other. The interactions with the other characters is great too, and there were some brilliant moments where we get to see the two main characters through the eyes of characters like Mad and Rak. We spend so much of the time in this book inside their heads that it’s interesting to see what they look like from the outside.

The only criticism I have of this book is that it needed a better editor. There were a lot of typos and there were several points where a new chapter or section started with a pronoun and it took me several paragraphs to work out who was the viewpoint character for this bit. A chapter would start with “he” and I would spend a page trying to work out if this was Alex or Sean, only to find out this bit was from Rak’s point of view. I through me out of the story. It’s a shame because otherwise this was a brilliant book.

Very emotional and highly recommended, but do be aware of the fact it tackles issues of rape and abuse. Five stars.