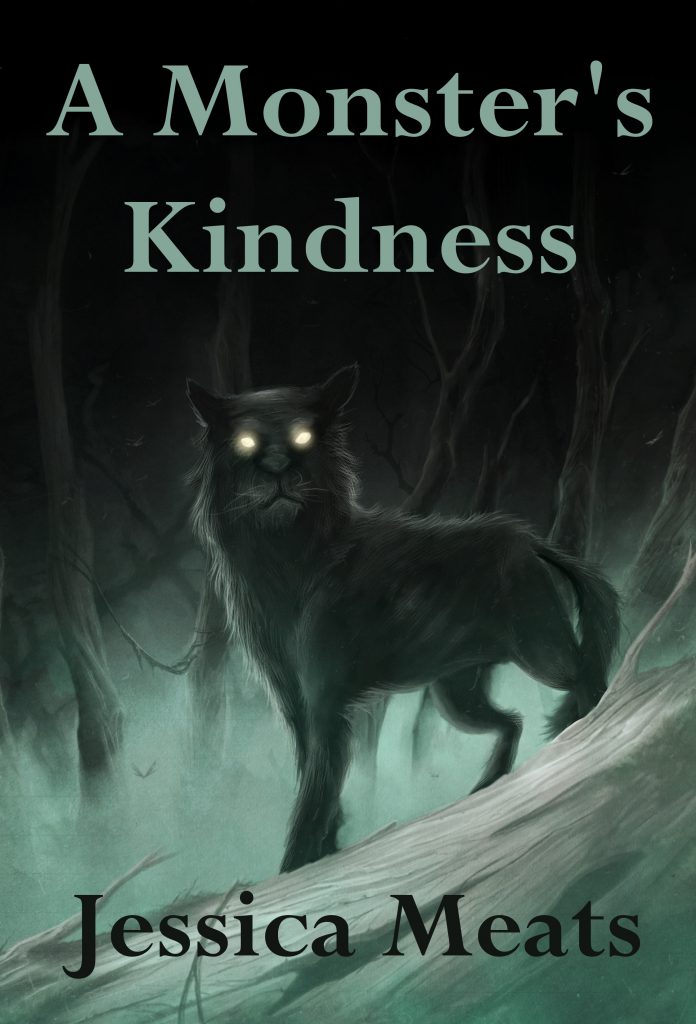 Amazon UK, Amazon US (These are affiliate links – I get a small commission if you buy the book from there)
Apple Books
Barnes and Noble
Kobo
And other ebook purchasing and subscription platforms

A Monster’s Kindness is now available for pre-order. UK link, US link. The book is officially released on 19th Oct.

For some reason the cover art isn’t showing up yet on the Amazon page.

Several months ago, I was really excited when my novella, A Monster’s Kindness, was accepted by Less Than Three Press. It was due to come out in a couple of months.

This week, the publisher announced that they are shutting down operations. I think this is really sad for many reasons. A large number of the book recommendations on the Queer Reading List were published by this company, so this is a loss for the fans of queer sci-fi and fantasy in general, but it’s upsetting personally to me because of my book.

Thankfully the edits have been done on the text of A Monster’s Kindness, and I received a sketch from the cover artist who was hired. The folks at LT3 have said that they will pay editors and artists to finish projects that have been assigned, so it looks like I will get a cover design alongside the edited manuscript. Given that all this hard work has been done to get the book ready for publication, I will probably self-publish A Monster’s Kindness. It was always going to be ebook only because of its length, so I can take that final step of publication myself.

I think it’s a huge shame about Less Than Three Press. Most of the books in their online marketplace will only be available until the end of the month. If there was anything of theirs that you were considering buying, I guess now is the time to do so. While you still can.

Watch this space for news of A Monster’s Kindness.

I have been working on edits for A Monster’s Kindness this weekend and it feels like I’ve crossed a boundary point. I moved a scene from a little way past the mid-point of the book to a point about eight chapters earlier, which necessitated a significant rewrite of that scene. I’ve now reached the point I stole that scene from so I’ve had to do another significant rewrite to fill the hole. This is probably the largest point of rewriting in the book. Most of the rest of the edits are fixing the odd sentence here and there, putting in a few more details, or adding a few paragraphs occasionally where tension needs to be increased.

So having just completed this rewrite of a whole scene, it feels like I’ve crossed over some threshold and what’s coming from this point on are the quick changes, the short fixes. It’s starting to feel like the home stretch.

That’s a nice feeling. I’m seeing the story come together and I’m looking forward to sharing it with the world.

I just wanted to give you a quick update of where I am with my writing right now. What feels like quite a while ago now, a novella of mine called A Monster’s Kindness was accepted by Less Than Three Press. I’ve just had edits back from them, so I will be spending a lot of time in the near future going through those.

I don’t have a timeline for the publication of A Monster’s Kindness. It will depend on many things, including how long I take to go through the edits and whether another round is required after this, but this book should definitely be published sometime this year. I will keep you posted as it gets nearer to the time.

The third book of the Shadows of Tomorrow trilogy is finished. I’m just putting the final touches on that one before I send it to the publishers. I’m sending it to the same publisher that published the first two books in the trilogy, so I’m hopeful that it will get accepted quickly, but there’s no way to know for sure. Like any submission, I have to keep my fingers crossed. Again, I will keep you posted as I learn more.

I said in last week’s post that I’ve finished the first draft of the next Codename Omega book. I’m letting that one sit for a while. It’s actually good timing getting the edits back because it means I can focus on Monster for a bit to get some distance on Omega before going back and doing the second draft of that.

There’s something really nice about having all these projects in there different stages and seeing the progress moving towards all these new books.

I tend not to set new year’s resolutions, but I do like to come up with goals for things I would like to achieve in the upcoming year. Here are my writing-related goals for 2019.

Of all of these, the Wolf Unleashed one is going to be the hardest to achieve but the point of having these goals is to push myself.

While I was on the writer’s retreat which I posted a review for last week, I finished off a novella. This was a gay, fantasy, romance about a man being sacrificed to a monster and finding that the monster showed him more kindness than his former neighbours. I submitted it to Less Than Three Press, a publishing house that specialises in LGBTQ+ romances (a number of their titles are on the queer reading list), and I received the automatic response saying that I would hear back from them in approximately six to eight weeks.

When I saw an email in my inbox less than a week later, my heart sank, because the response was so much quicker than I expected and, from experience, rejections are always significantly faster than acceptances. I saw that email and I knew that my story had been turned down.

Apparently acceptances can be that fast because they had said yes. They sent me a contract to publish the novella as an e-book, which I have now signed. The book still has to go through the editing process, but watch this space for more news as it comes out.

This is the fastest I’ve ever had a story accepted and it’s made me more than a little excited. It’s always a thrill to have a story accepted, but to have it accepted in less than a week on its first submission is something different. I can only assume that it means they really liked it and I can’t wait to share it with the world.

I have next week booked off work, which will be awesome, and I’ll be using the time as a writer’s retreat. My intention is to get some peace and quiet and really focus on writing for a few days.

I always have several projects on the go but there are three in particular I intend to focus on for this holiday:

I will probably work on all of these at some point over the week, but the question is where I should prioritise my efforts.

The first of those projects is probably the most urgent one as it’s been ages since the second book came out and the publishing process will take about a year even after I’ve finished it. One of my coworkers keeps asking when that book will be out, and since she’s still not forgiven me for killing her favourite character, I probably should finish the book at some point.

But having said that, tidying up the novella will probably be a shorter task. If I focus on that, I can probably get it done and have the book ready to go to publishers by the end of the week and it will feel great to have something definitively done out of this focus time.

But it would also be amazing if I could buckle down and get a complete first draft of Codename Blank Slate written.

I want to set myself definite goals because otherwise what will probably end up happening is that I’ll flit between all three of these and spend half the time writing fanfic instead. I will write some fanfic this week, but that’s not the point of doing this.

I’ve decided to set general writing goals as well as specific goals for each of these three projects. My goal is to spend at least half an hour a day on each of these three projects. That’s a small enough target that it doesn’t seem too daunting and over the course of the week off work, I should make decent progress on all of them, but it allows me the freedom to work longer on whatever happens to be flowing better that day.

I’m also going to set myself a word count target: 10000 words a day across everything, including fanfic and whatever other random stuff I end up writing. They won’t all necessarily be new words if I’m editing the novella which is why I think I can get away with setting the target so high. I can reevaluate after a couple of days if that seems like it’s going to be too much.