I’ve done a number of author interviews on this blog, but with this video I was trying something different and creating a video interview for my new channel. As with trying anything new, there were some technical issues, but I know what I need to do next time to get something a bit better. The new channel has a bit of a learning curve and if you have other suggestions for how to improve, I’m keen to hear them.

So here’s my interview with B C Matthews, whose book Riptide I have reviewed in a previous post. I’ve also written a review of the other book we discuss in this interview: Acheiropoieta. 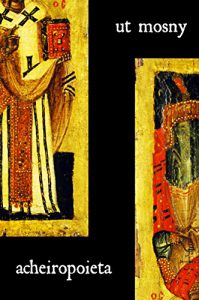 Back in November, I wrote a review of Riptide by BC Matthews. Recently, I came across a mention of Acheiropoieta by UT Mosney (UK link, US link), described as a companion book to Riptide. Since I really enjoyed Riptide, I decided give this one a try. The two books are by different authors but set in the same universe and there are a few mentions in this book of “the British incident”, essentially referring to the events that kicked off the plot of Riptide.

Niko is an artist, known for his gruesome religious work, including paintings of saints being martyred. For his work, he has earned the hatred of a local priest, and due to a copyright lawsuit he’s earned the hatred of a group of death metal fans, so angry letters, bricks through his windows, and death threats are a common occurrence. He takes this in stride, the prices of his paintings shooting up the more people complain about them.

For a painting of the death of Saint Sebastian, he needs to hire a model and this brings Jesse into his life. Jesse is an athletic, attractive young man interested in kinky sex, who wants a fun, no-strings-attached relationship with Niko. But the more time they spend together, the more Niko comes to care about Jesse, and to worry about him, because there’s something definitely wrong with him. Something that might come to light as Niko’s hate mail grows more gruesome.

I liked the idea behind this book and Niko was an interesting character. We get to see a lot of his background over the course of the book, but I didn’t really get inside the relationship the way I did with Riptide. The focus is on Niko’s past more than the relationship between the two of them, but even there it skimmed over a few areas. This was a very short book and I found myself wishing it was a bit longer, wishing we could have seen more of the interactions between Niko and Jesse to really get a feel for their relationship, as well as wishing for more background about certain areas. The hatred of the local priest for Niko is important to the story, but the book doesn’t really go into how that started (except that Niko has tattoos and doesn’t look the part of a religious man). There’s a friendship with Niko’s copyright lawyer that gets a single scene without being developed further. I would have enjoyed a longer book that took the time to explore these areas more, but especially to show us more of the interactions between Niko and Jesse.

There were also a couple of points where I thought the book needed another once-over by an editor. There were a handful of typos that crept into the finished manuscript, but there were also a couple of moments where the phrasing of the text left me confused as to what was going on and I had to reread those sections to try and puzzle it out, which through me out of the story. The worst of these was when a third character intrudes on Jesse and Niko and there was a reference to “the man” that I didn’t realise right away was another person and thought was referring to Jesse. Thankfully though, these moments were rare.

Overall my reaction to this book was a bit lukewarm – enjoyable enough but not going to make it onto my favourites list. I will look out for other books by this author, especially other books in this universe because, as I said, my main complaint with this book was that I wanted more out of it.