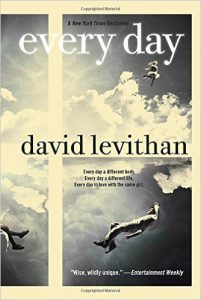 Every Day by David Levithan (US link, UK link) is the story of A, who lives each day in a different life. Each morning they wake up with a new body, a new name, and a whole new life. They must bluff their way through the day and then, the next morning, start all over again. They have no control over whose body the inhabit and no way to stop the transfer happening. Normally, they try to leave the people they inhabit exactly the same after the experience, but sometimes they make exceptions to the rule, such as when they spent the day in the body of a girl contemplating suicide.

When A meets Rhiannon, one day is enough to fall in love. A doesn’t want to leave her behind when they move into another body and so they start taking stupid risks for the chance to see her again. And now one of their hosts knows he was possessed and is desperate to find out what happened.

This was an enjoyable book and it was fun to see the different lives A briefly experiences. It gives a real variety of family situations, from an undocumented underage worker to the rich and bitchy queen of a high school. The book is really good for the diversity of people included, with A jumping between bodies of different races, different genders, and different sexualities. I loved that it showed the depressed sufferer as having serious problems with her brain chemistry that impacted A as well, rather than being dismissed as a “bad mood”. A themselves describes themselves as not really having a gender. Because they jump around each day, they don’t really feel either male or female but a bit of both.

Plot wise, most of the book is about A trying to stay with Rhiannon, but there is the threat of Nathan poking around, trying to uncover the truth. It’s more of a romance than an adventure.

I enjoyed this book. There were a couple of things that irritated me, including an event that happens near the end, so I won’t spoil it for anyone, but on the whole it was entertaining and enjoyable and kept me guessing. Four stars.