In this interview, I talk to C B Lee, author of Seven Tears at High Tide and the Sidekick Squad series, about her writing, the importance of LGBTQ+ representation in young adult fiction, and her upcoming books.

You can find out more about C B Lee at her website http://cb-lee.com/

Tell us a little about yourself.

Hello there! I’m C.B., a bisexual woman who grew up on the California coast. I work with inner-city youth at a environmental education nonprofit, and teach by day and write by night (although the hours aren’t very specific at that.)  I’m a first generation Chinese-Vietnamese American and value my mixed cultural heritage, especially the little immigrant neighborhood I grew up in. I love writing and reading stories of all kinds and hope to contribute many to come, especially about characters whose backgrounds are like my own, characters who I never got to read about when I was a teenager.

Now tell us a bit about Seven Tears at High Tide. 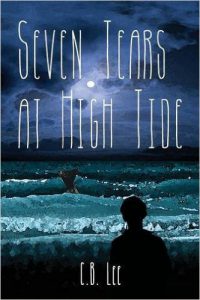 Seven Tears at High Tide is my first novel, set in a sleepy seaside town in central California, all about falling in love and having to overcome difficult choices foisted upon you by others. There’s a lot of inspiration for the setting from my travels and places I’ve lived, and I hoped to really transport the reader into a magical, dreamy setting. And I also love and adore all pinnipeds, especially seals, so it was so much fun getting to write about them.

It’s also my take on selkie lore, particularly on subverting the trope that follows a lot of the mythology, where a selkie comes ashore and their pelt— and subsequently their freedom— is taken away from them when a human steals it or discovers it. I wanted to write a story where the selkie— and the human both are presented with difficult choices in their relationship, and how they deal with these questions of agency.

What’s your favourite part of the book?

Oh, I have many favorites, but I am an absolute sucker for Magical Reveals, there’s just so much bundled into this trope that involves trust and building relationships and a character’s whole worldview changes. One of my favorite scenes is this twilight scene where Morgan takes Kevin to the beach and I’m rather partial to this bit:

The sky, caught in that nebulous time after sunset, still glows with the energy of the day, and the heavy velvet of night has yet to fall upon them. A few stars gleam through the purple twilight, as if they were too impatient to wait until dark to shine.

There’s a really pivotal moment that I’m laying out the scene for here, and I’m quite happy with the imagery and the transitioning themes and the anticipation for what is a huge turning point in the novel.

How did you get into writing?

I write because I love stories. It’s when I feel most alive, crafting something out of just emotion and idle thoughts and turning it into something another person can experience— it’s a kind of magic, I think.  The whole process of telling stories is a such vital part of the human experience, just part of our culture that makes us who we are. How we perceive our lives, what happens to us, our emotions— it’s all tied up in stories. The stories we tell each other, about our hopes and dreams, allowing people from all walks of life to see different perspective and to experience so many things. I love writing for many of the same reasons I love reading— not just for the escape factor.

I started very young— I remember writing stories was always my favorite part of school, and definitely remember crayon-scratching too many pages of the adventures of the people in the drawing when it was supposed to be a “brief” description of who they were. In middle school I carried around a notebook that had two ongoing high-fantasy-esque stories, one that started in the front of the book, and one in the back. If I got stuck on one I’d flip to the back and start writing for the other one. I never made it to the middle because I kept adding things and crossing things out; the whole thing was written in pencil. I still have that book, it’s all smudged with graphite and nearly illegible but I like to flip through it every now and then and try to make my twelve-year-old self proud.

I’m kind of all over the place. I both love outlining and hate it; I’ll start with a basic plot structure and idea and then pretty much fly by the seat of my pants for the rest of it, filling out the details as I go. I tend to write scene by scene, occasionally bouncing ahead if I have a particular scene I want to get to, but mostly I write in chronological order and let the story unfold as I write.

A huge challenge for me is keeping in task when I’m motivated; it varies so much, I’ve gone from utterly wrapped in a scene and writing eight thousand words in a day, to struggling with eight words on an entirely different day. I try my best to stay focused by taking short breaks, timing myself for short bouts of productivity, and moving around to get perspective.

Something I enjoy is writing by hand in places that inspire me. For Seven Tears, I took a journal to the beach and jotted down ideas when I was in San Simeon, where the novel is placed. I live on the California coast, so a lot of beaches and coastside trails factored into my wandering-and-writing habit.

Are there any authors who have particularly inspired you?

Diane Duane, Terry Pratchett, J.K. Rowling, and Neil Gaiman most definitely, for their intricate worlds of magic and worldbuilding and just storytelling in general. Lawrence Yep and Amy Tan were also a huge influence on me for being one of the few voices in literature when I was a child to create amazing characters and stories I could identify with.

Has anything surprised you since getting published?

I think I was pleasantly surprised by how closely knit my publishing house was; it’s a small independent publisher, so all the authors and editors and artists and everyone involved was very open about how things worked and introducing authors to each other, and people were very open about helping others who were new to the experience. I’m still very happy about this, how amazing all the support has been from start to finish. I think this isn’t exclusive to my publishing house; I’ve met so many authors from indie houses and the vibe is just so friendly and welcoming. It’s been great getting to know other people and other authors and the community of just wanting your peers to succeed is wonderful.

What advice would you give to someone who wants to write novels?

Don’t give up. I think it’s a very difficult endeavor, and so much of it is a cycle of working incredibly hard on a manuscript and hoping that someone out there will like it. You’ll face rejections, plenty of them, and it’s definitely hard on your confidence as a writer and a person, but I have such a high value on stories. Write them, write the stories you want to read, ones you want to share.

There’s a quote from Erin Bow that is about writing, but I think it applies to life, so, so much.

“No writing is wasted. Did you know that sourdough from San Francisco is leavened partly by a bacteria called lactobacillus sanfrancisensis? It is native to the soil there, and does not do well elsewhere. But any kitchen can become an ecosystem. If you bake a lot, your kitchen will become a happy home to wild yeasts, and all your bread will taste better. Even a failed loaf is not wasted. Likewise, cheese makers wash the dairy floor with whey. Tomato gardeners compost with rotten tomatoes. No writing is wasted: the words you can’t put in your book can wash the floor, live in the soil, lurk around in the air. They will make the next words better.”

I think this quote is so reassuring, about how no efforts are wasted, and in writing there’s often a lot of work that goes unseen, unrecognized, drafts that are torn apart and put back together, chapters thrown out, paragraphs rewritten. It’s so easy to get disheartened when you write, but everything you do, it’s part of the learning process and just adds to your overall skill and ability as a writer.

I love the quote and think on it a lot as not just for writing, but for life efforts, in the experiences that you have and it’s easy to look back and think that something might have been a waste of time, but it contributed to who you are and where you are now, and that’s important.

For anyone who wants to write a novel— don’t give up. Write it in pieces between your work shifts and half-remembered dreams, write it when you can, between your commitments to that job that pays the bills and your family. It’s a hard road, but it’s worth it.

If you could sit down for a chat with any author, living or dead, who would it be?

I very deeply admire the late Terry Pratchett, and would love to talk with him and really learn more about his amazing worldbuilding and extensive magic systems. I love his sense of humor and how well crafted all of his novels are; he was such a huge influence on me and I think it would be amazing to get the opportunity to get to know him.

I’m currently working on a young adult scifi adventure series in a post-dystopia world. Not Your Sidekick is the first novel in that series and follows Jess, a high school girl who comes from a family of superheroes— except she’s nonpowered, and really just wants to prove herself. She ends up getting an internship, working with her crush, Abby at a mysterious corporation which turns out to be run by the town’s supervillain, and these two girls uncover this huge plot that’s more than just heroes versus villains. And they also fall in love. Not Your Sidekick will be out September 8 of this year, and I’m really excited about it. I’m working on the second and third of the series at the moment.

If you want to know more about C B Lee and her writing, check out her website, or take a look at her book on Amazon.