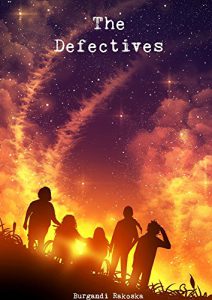 Over on Tumblr, I’m continuing my series of giveaways of books that showcase diversity. For July, I’m giving away The Defectives which I’ve reviewed in a previous post. This book has a disabled protagonist, multiple disabled and neurodivergent characters, as well as racially diverse characters.

If you want a chance to win this book, head over to Tumblr and reblog the giveaway post.

I’m still looking for suggestions of other books to include in this campaign, so if you’ve read a great SF&F book that features diverse characters, let me know in the comments and I’ll take a look.

is a story that manages to be both fun and deeply emotional. It made me laugh out loud in a few places and cry in others, sometimes only pages apart.

Juniper is a teenager with telekinetic abilities, all set to go to a prestigious school for superheroes – until she is left paralysed from the waist down in a car accident. She has to figure out who she is now that her expected future has shattered. Juniper is sent to a school for kids with disabilities as well as superabilities. At first, she feels that the school is like a prison, but she finds friends who can help her learn how to move forward.

The plot of the book follows a number of standard tropes, including the gruff mentor who turns out to have a heart of gold, and the protagonist who learns she’s no less of a person now that she’s disabled. Despite the occasional cliché, The Defectives remains an interesting read, with touches of humour in places, and some very genuine emotions in others.

The author is herself in a wheelchair which helps make Juniper’s experiences have serious impact. I really felt like I understood what Juniper was going through as the narrative explored her emotional journey. There are ups and down, moments of depression and times of joy, creating quite a journey that’s rooted in something very sincere. I can imagine readers who find themselves in a similar situation getting a great deal of comfort from this character’s experiences.

There are some background concepts that I wish were explored more. The story is set in a world where superheroes are common, and there are mentions of a war that took place without much explanation of its history or impact. At one point, it’s revealed that all people with superabilities have to take a test to determine if they will be heroes or villains. This seemed a very strange concept which is never really explained and I can’t imagine how the test could be administered accurately – people give the answers they know are expected to get sorted into the right house on Pottermore, so of course people would choose the “nice” answers to get tested as a hero. This whole idea jarred me out of the story because it seemed very strange and my questions about it are never addressed. I thought that the whole book would have made more sense if this aspect were just edited out. None of the other points jumped out as much as the morality test but there were elements of world-building I thought could have done with deeper explanations.

Where it does extremely well however is in how it addresses subjects of disabilities and accessibility in ways that would be relevant to the real-world. There are background details mentioned here and there, such as a bell tower chiming quarter hour marks to help blind students tell the time, that show how the school is built with accessibility in mind. There are moments when the disabled students show annoyance at how reporters ask a non-disabled person to speak for them instead of asking the students themselves, or when a character compares a broken leg to a long-term disability. All these touches add to the realism of an otherwise fantastic world.

On the whole, I did enjoy this story a lot. It’s a quick read that gets right to the emotions of the situation. Despite the gaps in the world-building and the occasional predictability, it’s still a book I would recommend.