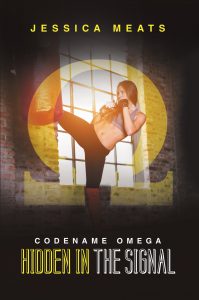 I realised recently that I hadn’t added Hidden in the Signal, the third book in the Codename Omega series to the My Books page on this blog. I’ve remedied that mistake now. The information on the third instalment of Jenny’s adventures is now up.

Hidden in the Signal continues the story of Jenny’s fight to uncover the truth of Grey’s Tower and to fight against the alien threat hiding on Earth.

Keep an eye on that page because I will soon be adding details of my upcoming book, Wolf Unleashed. I just sent the last chapter of edits back to the line editor today. I think there’s just one more round of checks before the text of the book is ready to go. We will be launching the book at this years Eastercon, Follycon, in Harragote over the Easter weekend. I will also be giving a presentation on the representation of gods in science fiction at the convention. The agenda is still being finalised so I don’t know if I will be on any panels, but I will let you know if I am.

If you’re going to be attending Follycon, come along to the book launch and say hi.

I’m spending a good chunk of time this weekend going through line edits for Wolf Unleashed, my upcoming book. Line editing is one of the last stages of the editing process, once any big issues with the story, structure, pacing, and so on have been fixed. At this stage, an editor goes through the book line by line and makes tweaks, fixing a typo here, or adjusting the word order there to make a sentence flow better.

Through this process, I am still the author. There have been points in this manuscript where the line editor has proposed a change and I’ve left a little comment saying, “Actually the point I was trying to get across was this and I think the original way does that better.”

There have been other moments when the line editor has suggested cutting a few words because they don’t really add to the story, but I’ve insisted on keeping them because they hint at something about the character that won’t be revealed until later. One on occasion, the editor got confused by a mention of two characters’ mums, and left a comment wondering which mum I was referring to, and the answer to that was both of them because they’re a couple, which is going to be explained properly in a couple of chapter’s time.

Going through an editing process, the author still has control, but it’s important to note that there are a lot of changes I haven’t argued with. A lot of the time, the editor is doing things like changing “that” to “the”, or putting in a synonym to avoid a repeated word, and I read the suggested sentence, agree, and move on. Line editors are an important part of the book writing process. They add a layer of polish to a story to prepare it for publication.

There’s still a little bit more editing to be done on Wolf Unleashed, but I’m looking forward to a launch for it at Eastercon this year. The convention, Follycon, is going to be in Harrogate over the Easter weekend. If you’re attending, you can come talk to me about the book, hear me read some extracts, or get your hands on one of the first copies.

Is anyone interested in participating in a blog tour?

My next novel, Wolf Unleashed, will be launching around Easter this year, published by Guardbridge Books. When the time comes, I plan to do a blog tour to get the word out – author interviews, guest posts, that sort of thing. If you write science fiction or fantasy books of the sort I discuss on this blog, I’m happy to talk about doing an exchange if you want to do something on this blog to promote your work.

Wolf Unleashed is set in a world like our own, but with werewolves existing as an abused and enslaved underclass. Crystal’s step-brother was bitten by a werewolf and in trying to find out what happened to him, she teams up with the rebellious werewolf Thomas to challenge the established order. With a black, bisexual protagonist and a diverse mix of characters, it explores both real and allegorical themes of prejudice, while still telling a fantasy adventure.