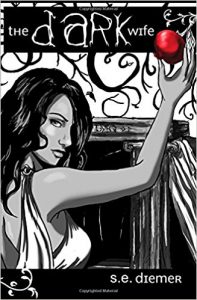 The Dark Wife (UK link, US link) is a retelling of the ancient Greek myth of Persephone. According to most traditional tellings of the story, Hades, the lord of the Underworld, carries off Persephone, daughter of the goddess of the harvest, to force her to be his wife. The gods attempt to rescue her, but because she’s eaten half a pomegranate while in the underworld, she has to live there for half the year, causing her mother to mourn her and thus causing winter.

This retelling has many of those same elements, but delivered with a new perspective and some significant changes. One important change is the fact that the ‘lord’ of the underworld is in fact a lady. Hades is female, and the title ‘lord’ is used by Zeus to mock her. The story also focuses on the idea from myth of Zeus being a rapist who takes what he wants. When Persephone’s lover is raped by Zeus and transformed into a plant, Persephone hates him, and ends up running away to the underworld to escape him, where she falls in love with Hades. Even the pomegranate plays a different role.

The story plays with many of the threads of ancient myths, such as the idea of the Elysium fields as a final resting place for heroes, and the three-headed dog that guards the entrance to the underworld, but with a new and refreshing take on these old ideas. I think part of the appeal of the story is the familiarity of these pieces and seeing them fit together in a new way, so I imagine that the story wouldn’t have the same appeal to people who are less familiar with the ancient Greek myths.

As it is, if you enjoy myths and want a story about immortal lesbians, then The Dark Wife is a very enjoyable story. It’s quite short and much of the focus is on the emotional journey rather than any action or adventure, but for fans of romance, I can see it being very much appreciated.

The characters are rounded and developed as people. The story is told from Persephone’s perspective, so we understand her motives and drives throughout the story, but there are a number of other characters who play important parts, including many of the gods, such as Hermes and Athena. The way the gods are portrayed compared to humans is interesting and feels genuine. The author explores how immortality would effect things like love and romance, especially when it’s between a mortal and an immortal. Despite all their powers, the characters in this story feel very human.

Four stars. One for fans of mythology.