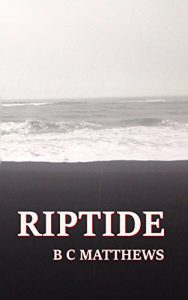 Riptide by B C Matthews (UK link, US link) is a book that straddles the boundary between fantasy and horror, romance and drama. Mark, the protagonist of Riptide, is a part-siren who starts this book by luring his boyfriend into the sea and eating his heart. I was therefore surprised how quickly and how deeply I started to sympathise with Mark. The opening of the book shows him grieving and full of guilt for his boyfriend’s murder, but then he begins to grow hungry again, craving human flesh. When his friend Sam discovers his secret, Mark begs him to help, to keep him from murdering anyone else. From there, they quickly slip into an unhealthy and abusive relationship, with Sam using this secret as leverage to keep Mark under his control.

While the story is a fantasy novel, the relationship between Mark and Sam draws on a lot of patterns and behaviours of real-world abusive relationships, which makes the whole thing seem more real. Things like Sam demanded to know where Mark is at all times, making Mark depend on him, making Mark feel like he deserves the abuse, all come from a very real place and make it clear that the author has done his research on abusive relationships.

One thing I especially like about this book is that it doesn’t romanticise the abuse. Often in books that are shelved as dark fantasy romances, there are abusive patterns of behaviour that are glossed over or treated as though they’re something to aspire to. Here, the abuse is made clear for what it is. Early on in the relationship, Mark is warned off by an ex-lover of Sam’s. A friend is clearly concerned when Mark freaks out that Sam might learn of a minor incident that happened while on a night out and a character explicitly talk about the relationship as abusive. The book makes it clear through text and subtext that this relationship isn’t something that should be aspired to while still showing the emotions behind why Mark stays in a way that’s very understandable.

Even though Mark is a killer, we get to see the story from inside his head and that makes it possible to empathise with him. He is like an addict, wanting to taste human flesh again but knowing that he shouldn’t, craving the next hit and terrified of what will happen if he gives in to it. As readers, we see his struggle and sympathise with him, while Sam deliberately manipulates that struggle to inflict further harm and to make sure Mark stays locked in the cycle of abuse.

It’s probably clear that this is a book that deals with some very dark themes. If you have a history of abuse, this may be a difficult book to read. The emotions feel very raw and real. If you can deal with reading books on such a difficult subject, then it is well worth the read. The only criticism I have is that I wish the ending had been a little bit longer. I would have loved to have seen a little more about how the characters adjust to certain things that I’m not going to spoil for anyone. Other than that, it’s an engrosing and highly emotional read. Five stars.