Last weekend was Nineworlds, a science fiction and fantasy convention held in Hammersmith, which had content around books, movies, games, and more. I wanted to share a few highlights from my experience of the convention. 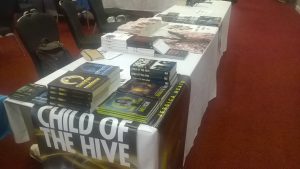 Firstly, there was the indie author table. This was in the expo hall and was a place for self-published or small-press-published authors to place their books for sale. I thought this was a fantastic idea, though it could have done with a little more organising. We got an email a couple of days before the event telling us that they needed authors to volunteer to run the table. Five of us did – each taking a four hour stint selling books – but other authors were able to just drop books off to be sold without taking a shift. If this is run in future conventions (which I hope it is) there should be a requirement for all authors to spend at least some time manning the table. After all, it isn’t fair for some people to lose half a day of convention time while others get all the benefits of the table without putting in the same effort.

On the plus side though, one of my books was the first to be sold on this table, so I’m pleased about that. 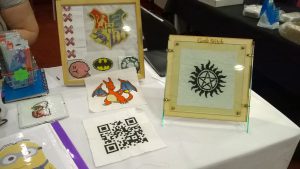 This was the first time Nineworlds has run an expo, so the expo hall wasn’t very large, but there were a couple of tables I wanted to highlight. The first was Geek Stitch, who produce a number of cross stitch kits on various geeky themes – from Pokémon to Harry Potter, Steven Universe to Supernatural. Most of these are suitable for beginners.

I was particularly impressed by the cross stitched QR code – which actually works!

If you’ve been following my blog, you’ll know I’m into my cross stitch, and I liked what these guys had on offer. 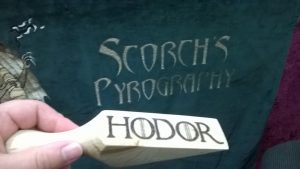 Another table that interested me was Scorch’s Pyrography. This is the art of using heat to write on wood and other substances. They had a lot of dragons on wooden boxes, some maps from various fantasy worlds (including the map from The Hobbit) but what got people’s interest (and a lot of cries of “too soon” from the Game of Thrones fans) was a doorstop with “Hodor” written on it.

There were a lot of sessions people could go to, from silly fun ones to deep philosophical analyses (my friend/editor presented a paper on the philosophy of being recognised – witnessed – in Mad Max Fury Road). There were several of these sessions that I enjoyed in different ways and for different reasons. There was a session on neurodiversity in fiction which got quite intense and one of the audience members got fairly emotional at one point. This was obviously an issue that hit home for a lot of the people in the room. If you’re on Twitter, check out the hashtag #nineworldsnd for discussions and book recommendations. 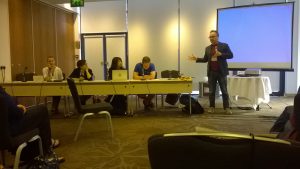 A much more light-hearted session was a Flash Fiction challenge. A group of writers were given prompts and expected to write something based on them in only five minutes. The audience then cheered for the one they liked them most. This was very entertaining and it reminded me of the writing games we used to play with my old writing group – trying to create something very quickly from some strange prompts. While the writers were scribbling away, Lee Harris, editor at Tor.com, entertained us with a quiz on a range of geeky topics – and I was please to be the first to get the Tad Cooper question (I super believe in you, Tad Cooper). 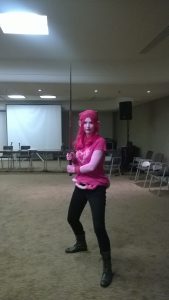 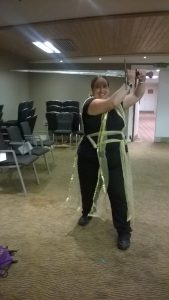 I unexpectedly got a ticket to attend a Swordpunk session. This was a hands on introduction to medieval sword fighting that involved us trying very hard not to stab each other or whack the ceiling while practicing moves with real swords. I say this was unexpected, because this was a session that required tickets and the tickets had sold old almost as soon as they’d been made available. I got in because my former kung fu instructor and his partner were attending and they’d managed to get tickets. Alex decided a few days before the event that he would rather go to another session that was taking place at the same time, so they offered me the spare ticket.

In the photos, I’m cosplaying as Abby, one of my own characters from the book Between Yesterdays. Laura is cosplaying as a ghost from a web comic I’d not heard of – complete with hand sewn intestines. 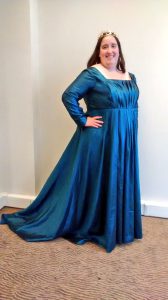 On the subject of cosplay, I got a lot of compliments for my Queen Madalena costume. Wearing an outfit like this makes you appreciate how practical jeans are. I was worried every time I got on an escalator that the dress was going to get caught and either cause a painful accident or just get torn off me, leaving me naked in the hotel. I made it through intact but I was very happy to change into my jeans at the end of the event.

Not a lot of people recognised who I was but I had an amazing moment where I sat next to someone in a panel who turned out to be friends with the costume designer on Galavant. We had an interesting conversation and she was the one who took this photo to send to her friend.

On the subject of cosplay, there were some great ones, though I realised I didn’t get many photos of them. I do have a couple I can share but this is just scratching the surface of the awesome outfits that were there. 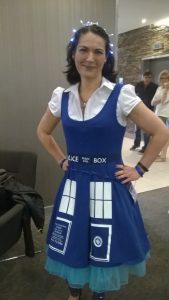 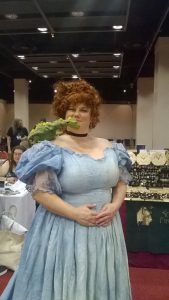 Overall, I had a lot of fun. It was an exhausting weekend but I enjoyed it immensely. Where do I sign up for next year?