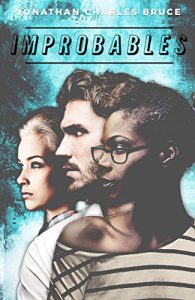 Improbables by Jonathan Charles Bruce tells the story of Abigail, a newly qualified journalist who moves to a new town to start a job at the local paper. With her love of YA fantasy books, she can’t resist her curiosity when she takes a photo of what looks suspiciously like a werewolf. This leads her to investigate the mysterious loner who lives outside of town and draws her into a world of the supernatural, but werewolves and vampires are just the start. There’s something dark lurking near this peaceful town.

I enjoyed the book but it took me a while to reach this point. The story starts very slowly. First, we have a prologue which has no impact on the plot. We witness the birth of some of the key characters but this doesn’t add anything to the book. Then we get the exciting saga of Abigail worrying about finding a job, hunting for a job, finding a job, starting a job, trying to set a good impression at her new job… and eventually, finally, she encounters her first supernatural. Even when she meets a werewolf and vampire, the action of the plot still seems a long time coming.

These early chapters also include several moments where Abigail criticises, either in her head or in conversation with other characters, the supernatural books she supposedly loves. She describes it as hate reading at one point. These sections felt like the author reaching out of the pages to say, “My books are so much better than the usual rubbish in this genre,” while insulting the tastes of his target readers. The chapters are also intersperced with excerpts from an online forum in which a horrible man describes his acts of revenge sex on women who had scorned him in the past. These sections are unpleasant to read and it’s not until a good way through the book that it becomes apparent why they’re included. Combined with the slow start, these sections of writing almost made me put the book down more than once.

By the half-way point in the book though, I was gripped. The plot had taken off by then and I was drawn into the mystery of the source of the threat. The pace dramatically improved in the second half of the book and kept my moving forward.

I’ve spent a lot of time criticising this book, so let’s focus on some of the things I liked: I liked the character of Abigail a lot. She’s an interesting person, determined to prove herself. The fact that she’s young and trying to demonstrate her abilities in work shines through and it’s built on a very real foundation of having to prove her capabilities as a black woman in a largely white small town. Real world issues bled through into the supernatural adventure in places. She felt very real and I had a lot of sympathy with her.

The author created some unusual supernatural creatures. While the first two “improbables” encountered follow the tropes by being a werewolf and a vampire, the others show interesting novelty. I especially like Stevie – a compound creature made up of thousands of spores acting in unison.

So, if you can survive the slow pace of the first half of the book, the second half makes a very enjoyable read.

Three and a half stars.