Start with the hardest question, why don’t you! I’m a writer, a reader, a knitter (I’ve made actual clothes now, so I feel I can say this even if I still don’t bother with tension squares!), an adoptive Northerner, a geek and a little overwhelmed by life 🙂
Now tell us a little about your writing.

You have just had a new short story published. What’s this one about? 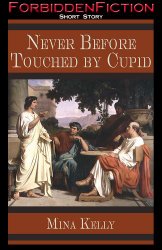 So Never Before Touched by Cupid isn’t new, exactly, but was published a few years ago by Forbidden Fiction as a standalone short, and is now being republished by them in a classical themed anthology: Timeless Lust. It’s an approach they take with a lot of their works, allowing them to offer a subscription model for readers that want it while also making stories available to purchase. Never Before is a little piece of real person fanfic, essentially, but with real people that most readers only know as vague and distant names: Horace, Virgil and Propertius. I’m a latin geek, and started shipping Virgil and Horace some years ago. I was inspired to include Propertius thanks to the introduction to a volume of his poetry that waxed lyrical about how attractive and manly he was and how the other poets would have been filled with a mix of jealous admiration and fatherly pride when he entered the scene. I was… skeptical. So I wrote out my scepticism.

How did you pick your nom de plume?

My online handle since my teens was been Minerva Solo – Solo for Han Solo, and Minerva from a time a friend assigned our group goddesses. I didn’t want to use it for my original fiction, but I took Mina from Minerva, and Kelly from Grace Kelly, because I’d recently watched Rear Window. 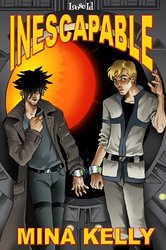 Do you have a favourite character in your stories?
Probably Jared from Inescapable. He’s a risk taker with a strong survival instinct, someone who loves easily and lets go even more so. He’s currently a smuggler who specialises in biological material, but he’s turned his hand to a lot of things over the years, and has trouble admitting to himself that maybe he actually wants something a bit more stable, and legal, as he gets older.

How about a favourite moment?
I don’t know that I can pick one. Jared’s escape from prison in Escapable. Toby chasing a car on foot in Flirt. Barnabas finding a naked man on the beach in Tease. Moments that change the direction of their stories or push their plots towards the conclusions.

Is there anything that’s surprised you since you got published?
I think the speed with which the small ePress bubble burst caught me out, and not just me. Amazon took self-epublishing from a labour-intensive niche to the push of a button almost overnight, and it did strange things to the market in all directions. Competition splintered into millions of individual authors, instead of a handful of publishers, and once price stopped being dictated by retailers readers diversified in terms of what price they were willing to pay for what quality. I’ve loved working with small presses, but even the most established ones are closing down or collapsing under the weight of the competition, and I think it’s going to take some new and impressive tactics to stay ahead of the new market.

Are there any authors who particularly inspire you?
I’m really into Courtney Milan’s historicals right now. She writes such a great, diverse range of heroes and heroines and uses them to explore pieces of history that often get overlooked in the genre. She makes me want to write one, but I’m still looking for the right plot (one which mostly plays to the historical knowledge I already have, so I don’t disappear down the research rabbit hole and forget to actually write the thing!)

Think about the career you want to have with them: where you want them to be available, what kind of control you want over them, how long you’re willing to keep going if no one reads them. It’s like snog, marry, avoid, except it’s art, career or hobby. You can do all three, write different books for different reasons, but remember to wear the right hat for the right book.

What are you working on at the moment?
Mostly knitting! I have various nieces and nephews on the way, so that’s taken precedence recently. My ‘to finish’ manuscripts folder at the moment includes an m/m football romance, an m/f holiday romance, and a third selkie book.

If you want to know more about Mina Kelly’s books, you can find them on her Amazon page. She also has a website at http://solelyfictional.org