Hi Jess, thanks for having me over. I’m Paul, I’m a writer of horror, sci-fi and music related books and internet things. I’m in my thirties, and I live in Yorkshire with my wife, two children and slightly batty puppy. Oh, and my Spotify account, which I kind of feel as strongly about as I do my children.

Now please share a little bit about your new book. 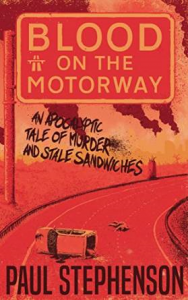 Blood on the Motorway is an apocalyptic horror set in the north of England. It’s set after a series of mysterious storms decimate the population, and its about how the survivors try to deal with things like running out of bread and serial killers. It’s a bit of a dark comedy, but there’s also a crime novel lurking in there somewhere, as well as some dollops of sci-fi. That probably makes it sound like a bit of a mess but it isn’t. I heard someone describe it as ‘a mystery wrapped in an apocalypse’ which I liked.

You’ve got another couple of books coming up later this year. Are they related to Blood on the Motorway?

Blood on the Motorway is a trilogy, and books two and three should be available this year, all going well. There’s also Welcome to Discovery Park, which is a non-fiction story about my attempts to listen to all 500 albums on the Rolling Stone Top 500 Albums of All Time list, which is hopefully both a cutting look at music journalism in general, but also quite funny.

You describe yourself as a punk publisher. Where did this term come from?

Music and writing have always been twin passions. I’ve always been involved in the music world, either as a musician, an event organiser or as a writer, and when I found out about self-publishing it just really clicked with the punk ethos that I’ve always held dear. The idea of doing it yourself, building your own fanbase, and not letting other people compromise the art that you want to put out in the world was very appealing to me. As I got deeper into the ‘indie author’ community I found that there’s a weird identity crisis at the heart of it, which I think stems from a slight sense of inferiority that comes from the way it began, that this publishing revolution is entirely beholden to a corporate behemoth, and the fact that trad publishing can be very dismissive of it. I thought by reclaiming it as Punk Publishing we could get over that stigma a little.

What was the most challenging thing about publishing Blood on the Motorway?

Going back to the DIY ethos, if you’re doing everything yourself then you have to make sure it’s the best representation of what you can do. When it’s your first book, doubly so, because it has to be a statement you can be proud to stand by to all the people who have inevitably doubted you can do it over the years. So I think that process of revision, beta reading, editing, revision, it’s a hard thing to do, but ultimately I hope it was worth it.

Do you have a favourite moment in your books?

I’m a terrible one for getting really invested in my characters and then doing terrible things to them. In Blood on the Motorway there are a couple of moments that I really hope will make the reader put the book down and have to walk around the room a few times before they pick it back up again. Those are my favourite moments.

I wouldn’t be the writer I am if I hadn’t read five authors: Stephen King, Hunter S Thomson, Douglas Coupland, Nick Hornby and J.K Rowling. All completely different writers, but those are the five whose books I go back to again and again.

Probably Hunter, because he was just so out there in everything he did. Stylistically he was so influential to me, as a person he seemed kind of terrible, but if the worst came to it we could talk about music.

I would say that whatever you do, go write a first draft. All the way through. Don’t get caught in the trap I did for a long time of endlessly rewriting three or four chapters to make them perfect. They can’t be, because you don’t really know what the book is until you’ve written the story from start to finish. And try to read a wide range of authors, genres and styles, then steal from the people you like, with impunity.

The main task at the moment is to finish the second draft of the third Blood on the Motorway novel, then work on Welcome to Discovery Park. After that I’ve got a sci-fi that’s been bouncing around my head for nearly three years, begging to get out, which I can’t wait to get to. I’m teaming up with a nuclear astrophysicist and a biologist to research it, so that’s going to be a lot of fun. And I’ll be continuing my Musical Waffle on my blog.

To find out more about Paul Stephenson, check out his website at http://paulstephensonbooks.com