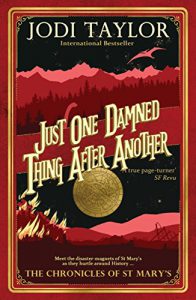 Just One Damned Thing After Another by Jodi Taylor (UK link, US link) is a fun book that walks the border between science fiction and fantasy. For the most part, it feels like science fiction, with futuristic technology driving the plot, but there are hints at elements from mythology towards the end that lend it a fantasy air. It tells the story of St Mary’s, a historical research organisation with a difference. These historians actually go back in time. Technological developments allow them to go back and see what actually happened at major historical events, answer key questions, and take recordings of what they see.

The main character is Max, a historian who signs on as a trainee at the start of the book. She is surrounded by a mixture of academics, engineers, security staff, and medics, who are all disaster magnets and generally obsessed with getting a good cup of tea. It’s a lively story, told with a lot of humour and most of this humour comes from the interactions between the various characters. I did struggle sometimes to keep some of the minor characters straight, especially since they might be referred to by first name, last name, or nickname. There was a list of characters at the start of the book which served as reference and I found a big help, but it didn’t stop me from getting muddled now and then.

There are some dark moments in the book. While the tone through most of it is light, there are some dramatic events that stand in stark contrast and the emotion of these sections really works, probably because of the contrast. It makes them feel more raw and real.

On the whole, I’d say that this book is good entertainment. It’s an enjoyable read and very easy to get through. It’s a perfect holiday read for when you just want to relax with something amusing and fun. Where I think it struggles is in terms of a coherent plot. There are some plot threads that flow through the book as a whole, but there are times when the book feels more like a series of events rather than forming a solid whole. As the title suggests – it’s one thing after another. There are separate chunks of the book with their own focus and activities and I almost think it would have worked between if the author had made more of these distinctions, breaking the book into separate parts and treating each as a separate episode within the larger narrative. It did pull the plot threads together a bit at the end though, so this criticism is a fairly minor one.

I think the author assumed considerably more historic knowledge of the reader than I had. There were references to historic events which were largely explained. Some of these references I got, but others just passed me by. Someone with more of a background in history than I have would probably have enjoyed this more, as it was I could have done with a little bit more information about the things being referred to. Thankfully those that were more critical to the plot were explained, so it was mostly the off-hand comments and throwaway lines that I ended up missing.

Overall, I’d give this book four stars out of five. It’s not going on my favourites list, but I did enjoy reading it and I will look out for other books by the same author in the future.